Stroke is the third leading cause of death in the United States behind heart disease and cancer. Each year, approximately 700,000 people suffer a stroke, and of these, about 500,000 are new strokes and 200,000 are recurrent strokes. 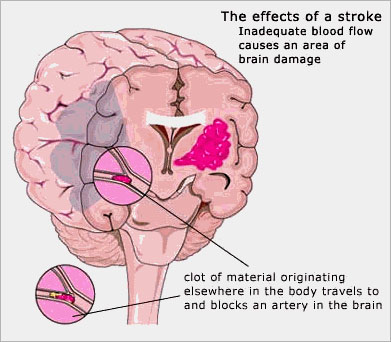 Another often used term when discussing stroke is TIA or transient ischemic attack. A TIA results from a temporary blockage of a vessel and symptoms typically last less than 15 minutes but can last up to a day. A TIA can be a precursor of a larger stroke.

Risk factors for stroke include hardening of the arteries (atherosclerosis), diabetes, high blood pressure and diseases that cause the blood to clot too quickly. These same conditions are associated with blockages in vessels elsewhere in the body such as in the heart or legs.

Symptoms of stroke can be distinctive but are often not recognized by the patient or those in the company of the patient when the stroke occurs. This lack of awareness can often mean the difference between a successful outcome and an unsuccessful one as a stroke condition MUST be treated within a three to six hour time window in order to restore blood flow to the brain. The following symptoms may indicate that a stroke is in progress: the sudden appearance of weakness or numbness in one part of the body, difficulty seeing, difficulty speaking (slurring or saying words that don’t make sense), sudden headache, difficulty walking or loss of balance. If you or someone you know begins to experience these kinds of symptoms, it is important to seek immediate emergency attention. A stroke should be thought of as a “brain attack,” similar to a “heart attack.”

The impact of stroke on a patient’s life can be devastating, causing one to relearn basic functions and adjust to life without speech or the use of a limb. Thus, it is not surprising that stroke is the leading cause of serious, long-term disability in the United States. Between 15 and 30 percent of stroke survivors are permanently disabled. Three months after onset, 20 percent still require institutional care. In 2003, stroke related medical costs in the United States exceeded $50 billion.

As a patient’s recovery from stroke is largely dependent on the amount of time that elapses between onset of symptoms and treatment, national efforts to educate the public center around one key message: stroke is a brain attack. Traditional treatments for ischemic stroke include tPA, a clot-busting drug given intravenously, which must be administered within three hours. In the last decade, intra-arterial (through the artery) catheter-based therapies were developed, extending the required treatment time to up to six hours. Designed to eliminate blockages in particular kinds of stroke, intra-arterial therapy is performed by inserting a catheter into the groin area and routing it through the blood vessels up to the blockage in the brain under X-ray guidance. Once the catheter is positioned, clot-busting drugs are delivered directly to the site of the blockage.

The most recent technological advancement in the treatment of stroke is the Merci® Retriever System manufactured by Concentric Medical. A tiny corkscrew-shaped device, the MERCI (Mechanical Embolus Removal in Cerebral Ischemia) Retriever is inserted through a catheter (as in other intra-arterial treatments) directly to the site of the clot. Once positioned, it is deployed to engage and ensnare the clot, pulling it back through the catheter and out of the body. Available at 120 hospital sites throughout the nation, the Merci Retriever can be used up to eight hours following symptom onset, and in some cases, even beyond this timeframe.

Ultimately, in the treatment of stroke, “time is brain.” If a patient gets to the hospital after too much time has elapsed, the damage is usually permanent and efforts to re-open the vessel may make things worse by causing a bleed in the brain.