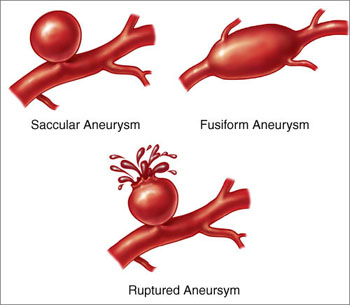 An aneurysm is an abnormal, outward swelling (bubbling) of the wall of the artery due to a weakness in the wall at that particular site. Those aneurysms involving the arteries in the brain are a serious medical condition. They can either rupture (bleed) resulting in death or stroke or they can compress surrounding brain tissue or cranial nerves, which can result in progressive neurological deficits.

Brain aneurysms are usually acquired with age. The most significant risk factors are cigarette smoking and having a close relative who had an aneurysm. They affect more females over males (3:2), and 20% of patients have multiple (two or more) aneurysms. The average age at presentation is usually 40-60 years old. Aneurysms are classified by their size and shape:

The risk of an aneurysm rupture is estimated at 1% to 2% per year and varies with aneurysm type, size, location, and history of previous aneurysm rupture. When a brain aneurysm does rupture, the blood usually goes into the subarachnoid space (a space that closely surrounds the brain), or less commonly directly into the brain substance. These patients often complain of a severe headache and describe it as “the worst headache of my life!” A subarachnoid bleed is considered a medical emergency with potential major complications to the patient. Up to 25% of those patients will die before getting to the hospital. Another 25% are at major risk for stroke since the bleeding from the aneurysm will often cause the major blood vessels of the brain to become severely narrowed. This is a condition called vasospasm.

Most patients have no symptoms or complaints until the aneurysm ruptures. In 40% of cases, there are some warning signs that an aneurysm is present such as pain above and behind the eye, nerve paralysis, localized headache, neck pain, nausea and vomiting. Fortunately, an increasing number of aneurysms are found prior to rupturing because CT (computed tomography) and MRI (magnetic resonance imaging) are now used commonly to assess patients with these complaints. Although CT and MR can show many aneurysms, most patients with aneurysms need a cerebral angiogram for definitive diagnosis and to determine the best course of treatment.

The treatment of an aneurysm is often determined by its size. Traditional surgery is performed by a neurosurgeon; however, the patient may also have the option to select endovascular treatment or “coiling,” a less invasive option with fewer risks.

As an aneurysm is really a “ballooning” in a weakened area of a vessel wall, the goal of “coiling” is to pack the aneurysm tightly to close off blood flow into the aneurysm thereby preventing its rupture. Occasionally, it is necessary to add more coils at a later time to complete treatment.

Certain aneurysms may be treated by blocking the artery from which the aneurysm arises using coils or detachable balloons. Additional new methods of aneurysm treatment are in development.

Hospitalization time varies from patient to patient. A 1 or 2-day hospitalization may be possible for certain patients who have not had a hemorrhage, but patients who have had a recent brain hemorrhage from a ruptured aneurysm may expect to be hospitalized at least 10-14 days minimum. A follow-up x-ray, MR scan, or an angiogram may be performed to evaluate the position of the coils.

Patients may be placed on a blood thinner such as aspirin after the procedure, which may be continued after discharge.